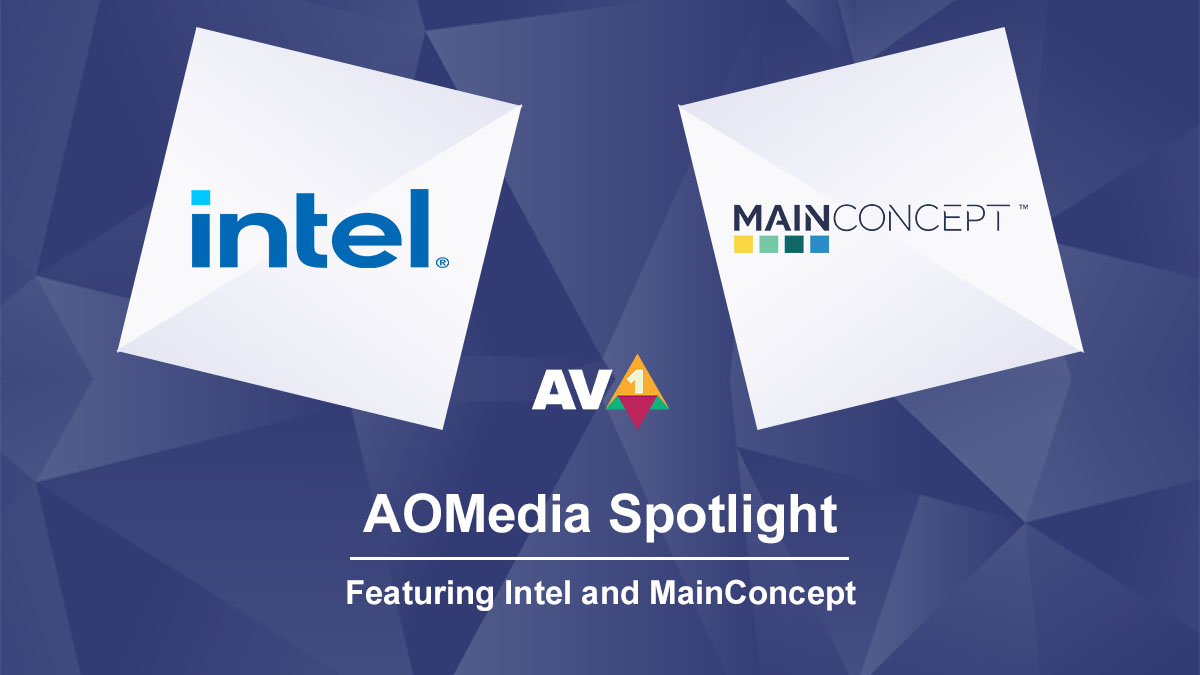 The open-source Scalable Video Technology for AV1 (SVT-AV1) encoder is now a part of MainConcept's extensive codec portfolio. MainConcept is a leading provider of codec and streaming technology to the professional video production and broadcast industries. According to the company's announcement, "MainConcept Brings Fast, Efficient AV1 Encoding to More Video Platforms," the move will make it easier to leverage AV1's compression efficiency for cloud and edge technology developers and platform providers. Below is AOMedia's Q&A with Intel's Director of Visual Cloud Software Strategy & Business Activation Craig Hurst, an AOMedia member representative, and MainConcept's Vice President of Marketing Geoff Gordon.

Please briefly describe the benefits of integrating SVT-AV1 into the MainConcept codec portfolio.

Working with Intel, we integrated the AV1 encoder and the SVT framework into our API, allowing it to run efficiently from edge to cloud on multi-core CPUs, such as Intel Xeon Scalable processors.

It's all about simplicity. Whether or not you've worked with our codecs before, getting going with MainConcept SVT-AV1 is easy. And since it is supported by AOMedia and Intel along with other large players in streaming, we know the demand is only going to multiply from here.

Intel: AV1 continues to gain traction across web browsers and mobile operating systems, with extended hardware support for decode on the way, and it's clear that AV1 has solid momentum as a codec of choice for video distribution. Offering better quality and lower bitrate as compared to other codecs, AV1 allows users to distribute more content, providing a great experience to even more consumers. MainConcept's integration of SVT-AV1 will provide highly optimized AV1 encoding to the market with the support and confidence MainConcept brings to their customers.

What are the benefits of SVT-AV1 to the video ecosystem?

Intel: As noted in our blog, AV1 is a royalty-free, open-source project that removes the uncertainty for service providers when it comes to the licensing and deployment costs of other codec standards. Most important, AV1 is also much better at compression efficiency and can deliver up to 50% savings, according to Facebook, when compared to the industry's most prolific CODEC, x264. Media services have already started to adopt AV1 for this reason.

SVT-AV1 takes this further. SVT was designed to run efficiently on multi-core CPUs from edge to cloud. The encoder core is split into independently operating threads, each thread processing a different segment of the input picture, running in parallel on different processor cores, without introducing any loss in fidelity. Integrating the open-source SVT-AV1 into MainConcept's SDK makes it easier for developers and platform providers to take advantage of cloud and edge technologies and leverage the compression efficiency of advanced codecs.

MainConcept: At its core, SVT-AV1 enables the creation of VOD content at the highest possible quality, and it's extremely efficient and scalable, giving users a great deal of implementation flexibility. We all know bandwidth is an issue, especially these days. With AV1, it is possible to deliver higher quality video without further taxing the system.

What are examples of types of use cases this will enable (OTT)?

Intel: We're seeing more use cases all the time, and SVT-AV1 is going to accelerate this trend. For example, last year Mozilla Firefox demonstrated AV1 software decoding for live-streaming, and this year Netflix announced that it would start using AV1 for select titles for Android users. Hardware manufacturers are starting to roll out AV1-capable devices as well. At CES 2020, both Samsung and LG unveiled televisions that take advantage of the AV1 codec for 8k resolution. In addition, multiple merchant silicon vendors (including Intel) are now offering, or have announced plans to integrate, an AV1 hardware video decoder to enable PC, smartphone, set-top box and other device playbacks. For SVT specifically, there is more information at https://01.org/svt.

MainConcept: AV1 is the ideal choice for OTT content distribution of high-quality, high-resolution premium content. VOD services of any kind – free, subscription, transaction-based – will benefit from enhanced image quality while at the same time bandwidth requirements will be lower compared to other codecs. Using SVT-AV1 results in storage and bandwidth cost savings without sacrificing end-user experience.

AOMedia's new Software Implementation Working Group (SIWG) is now exploring how the ecosystem can provide great video experiences to an expanded group of mobile and online consumers. We urge interested parties to join and contribute.

This year AOMedia saw continued momentum despite the challenges brought about by the pandemic. First, AOMedia welcomed new members iSIZE and Snap Inc., who...

As we head toward the mid-point of 2021, we are seeing an increase in AV1 adoption. Not only are consumers now using more up-to-date devices, but they expect...